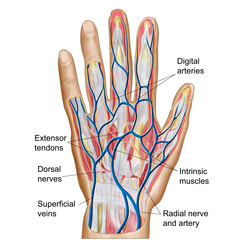 Trigger finger is a common and painful disorder of a finger's flexor tendon that causes the finger to "catch" or "lock" when bent or released (if the thumb is affected, the condition is called "trigger thumb"). Trigger finger can be caused by repetitive motion of the finger, rheumatoid arthritis, diabetes and gout. Grasping something for an extended period of time can also result in trigger finger.

Trigger finger is usually more common in the dominant hand, and in the middle and ring fingers, or the thumb. Symptoms often get progressively worse, and may include:

It is also possible that the finger, after catching or locking when bent, will suddenly pop straight. The reverse is also possible: The finger may lock in the bent position and be unable to be straightened.